The first thing that strikes you on meeting Glebe author Justin Sheedy is that he’s a man of passion. It’s a trait which shines through in his writing and is one reason – combined with the fact that he tells a great Australian story – that his latest book has been so warmly received. Nor the Years Condemn is a tale of shining young men destined never to grow old, an historical fiction based on the stunning true and untold story of the young Australians who flew Spitfires against Nazi tyranny in WWII.  What was his inspiration to write this story?

First of all I wanted to tell a truly great Australian war story of which, by contrast to our Gallipoli story, most Australians are unaware. Gallipoli is so important to us, as there we discovered who we were as nation: a young people looking after each other in the midst of the worst situation imaginable, all while fighting a heroic defeat for our imperial masters. Nor the Years Condemn is based on a true story of Gallipoli magnitude; not one of heroic defeat but of stunning victory, albeit at tragic cost.

These Australian Spitfire pilots – how young were they exactly?

In their late teens and early 20s. Hadn’t had a girlfriend yet. 1939, England, alone against Nazi Germany, calls out to its British Empire, “HELP. Send us pilots”. Every young Australian male says “Pick ME!” yet to fly a Spitfire, only the “best and brightest” could be picked. With staggering irony, this “best and brightest” had volunteered for one of the fastest ways to die of the War. First time on a ship, if they survived being torpedoed they got to England where they flew Spitfires against young German gentlemen; when they should all have been Olympians against each other, Formula 1 drivers; for this was the kind of young men they were – because they had to be. 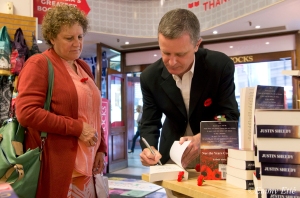 Precisely! It’s a saga so exciting, so tragic, so dramatic as to seem the stuff of science fiction, and yet it’s true! And it’s just so rewarding for me that readers are engaging with my story as the anti-war portrait I intended; one of young people doing with such brilliance, style and world-beating heroism what they should never have been asked to do: end a war. Which they did.

Who do you see as your readership for this book? 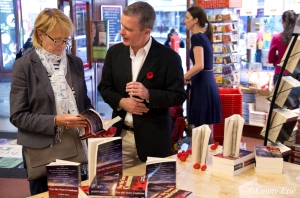 Well, there’s a perception that anything on Spitfire pilots is a “boys’ story” so it’s been to my delight and relief that I’ve had grandmothers vowing, “I laughed and cried, didn’t want it to end, I was right in the cockpit with the main character!” Also, it’s very much a mothers’ story too, as for every shining young man who flew a Spitfire, there was the poor mother cursed to let him go. The loss of any young man in war is a tragedy but that these young men were the ‘brains’, the sports stars, the young souls of exceptional character and sense of humour can’t help but make for a heart-rending read.