Just one of a string of recent interviews I’ve done for my latest book, No Greater Love, here mid-2017 with the excellent Barbie Robinson of ArtSoundFM 92.7 Canberra on her Write On program, a fabulous show for readers and writers in the Canberra area and of course streaming online. As you’ll hear, it was a really nice interview between us and an in-depth one, at 16 minutes duration, in live radio terms a really LONG interview yet that can only happen when the rapport between presenter and guest is truly there, genuine and solid. Which it was. Audio below.

One of the most fun radio interviews I have ever done.  From 2014, a hilarious live 2UE studio chat with Australian media icon, Angela Catterns, soon after the release of my 1980s pop-cultural portrait, Memoirs of a Go-Go Dancer. Discussed are the hideous ‘fashion crimes’ of the 1980s plus the culture & music good & nauseating of the era. As you’ll hear from the audio, an absolute hoot live on-air. (Even my father was impressed and he’s never impressed by Anything!) Audio below. 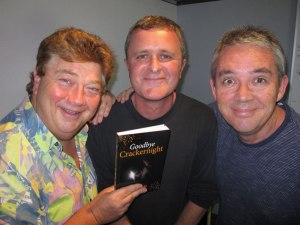 From 2009, an Australia-wide broadcast interview on WS-FM with Aussie airwaves legends, Jono & Dano, to promote the launch of my first book, Goodbye Crackernight. As you’ll hear, Jono & Dano (pictured) really caught the vibe of this, my first book, for the “shared” memoir of childhood that it is. Until the 1980s, “Crackernight” was for Australian children our national equivalent of the “4th of July” or “Guy Fawkes Night”, my book a fond remembrance and farewell to the innocence & freedom of an age now long-gone. Audio below.

A 2014 live phone interview on 2UE with elder statesman & national treasure of Australian TV & Radio, Clive Robertson. Our air-time featured Book 2 in my Australian war trilogy, Ghosts of the Empire, including a reading excerpt by me which I thought came out really well for a telephone interview. It was an honour for me to be interviewed by Robertson as he is a cultural hero of mine, back in my university days a figure with a devoted student following for his anti-establishment intelligence and sense of humour despite his “old-school” demeanour. Audio below.

A fab interview I did on Sydney’s TripleH-FM in early 2012 to promote Book 1 in my Australian war trilogy, Nor the Years Condemn, which at the time had just been released. A really joyous extended studio chat with presenter, Philippa Bird, featuring a reading excerpt by me of Nor the Years Condemn plus a mention of my by then warmly-received first book, Goodbye Crackernight. (Please note that as per this 2012 conversation, Nor the Years Condemn was still only available via Amazon, just months later becoming available at all Australian bookstores, Waterstones online, Barnes & Noble online and all major book websites as are all 5 of my books today.) Audio below.

From 2014 again (5 years after the release of my first book, Goodbye Crackernight), a 2UE phone interview on the book due to its apparent enduring appeal with readers plus an ongoing public swell in Australia for the re-instatement of “Crackernight”, our now long-gone annual fireworks festival whose life and times my book celebrates. When you listen to this chat between me and interviewer Mike Jeffreys (a thorough gent a whole generation older than me), you’ll feel the genuine bond between us no doubt due to Crackernight having been an annual festival cherished by Australian generations all the way back to my Grandmother’s day. Crackernight, a night of fireworks all across our cities and suburbs, had its dangers. In a safer society now long-gone. Audio below.

Okay, one for the World War II history nuts, from 2012, a podcast following on from the release of Book 1 in my (air) war trilogy while in the process of writing Book 2. Hosted by the online team at “Plane Crazy” including aviation journalist, Kathy Mexted, this interview covers in some detail the aircraft and social and historical themes and issues as featured in my trilogy, also my personal inspirations for writing it. Audio below.

From 2009, in the lead-up to publication of Goodbye Crackernight, a spookily-timed interview of me on ABC Radio Canberra in the very week that, in the capital of our nation, Australia’s long-cherished annual fireworks festival of Crackernight was finally cancelled forever. Audio below.